The clamour for action around climate change has never been louder, but few would imagine that this action includes getting up early to emasculate plants.

Yet, climate change is the reason ACCI PhD student, Kwame Shamuyarira, spent weeks, through late winter and early spring, alone in a greenhouse in the small hours. In April he began his PhD research and this work was part of a project, started by Dr Isack Mathew in 2016 as part of his PhD research, on breeding wheat for drought tolerance and carbon sequestration.

The project’s goal is to breed wheat with improved roots systems, as a way of increasing drought 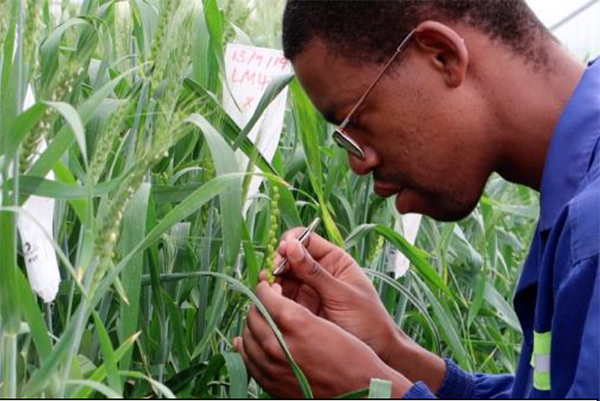 tolerance and the sequestration of more carbon in the soil. Carbon sequestration – where carbon is removed from the atmosphere and stored, usually by plants and trees during photosynthesis and in soil, is important because it helps mitigate the effects of global warming.

Because the three years Mathew had available for his PhD research were not enough to develop a cultivar, his work on the project laid the groundwork for breeding, and he spent his time evaluating available genetic diversity for the end goal. Mathew was awarded his PhD in April this year, his work complete.

The baton has now been passed to Shamuyarira, who hails from Marondera, Zimbabwe and says he “stumbled into agriculture”. With a father who was a journalist and a mother who’s an accountant, Shamuyarira studied Crop Science and Horticulture at Fort Hare University before deciding he wanted to pursue a career in plant breeding.

He took a leap of faith, travelling to UKZN and knocking on the doors of various academics to pursue this dream. His boldness was rewarded with an offer to study further through the ACCI, with funding from the Rockefeller Foundation and the National Research Foundation.

Shamuyarira started a master’s degree in plant breeding in July 2018, where he worked on breeding wheat for drought tolerance, and he graduated earlier this year.

“Isack had done a narrow selection of 10 parents,” says Shamuyarira. “My starting point was that I took his 10 parents and crossed them to produce 90 progeny that I have developed.”

Wheat is a self-pollinating crop, so it doesn’t cross with other plants easily. His work in the greenhouse was delicate, involving the removal of plant anthers with small scissors to prevent self-pollination. These flowers were then covered with a paper bag labelled with the date of emasculation and genotype name.

“Two to three days after emasculation I pollinated the plants using pollen from a parent I had chosen, by taking a entire spike or flower and putting it into the little bag. For crossing you need humidity, which is why this is usually done in the early morning and late afternoon,” he says.

Seeds from these pollinated plants are now being multiplied and the first field trial will be planted next winter under drought and well-watered conditions, using the ACCI’s facility that simulates drought conditions, and the greenhouse.

These crosses will also be analysed for amount of carbon sequestration, which is the main point of the research.

“ We are trying to put carbon back into soil by increasing the root biomass of wheat plants, so that most of the plant biomass is below ground and plant carbon is converted into soil carbon,” says Shamuyarira.

“The plants Isack selected have good traits for root biomass. I will be looking at the crosses to see if any have better genetic combinations for root biomass than the parents, which will be advanced for further evaluation and selection.”

To measure the carbon in the roots, Shamuyarira will take about ten of the best crosses and grow them alongside the parents in an airtight gas chamber, using isotope carbon-14, which is

different from the carbon-13 found naturally in the atmosphere.

This will allow him to trace the carbon absorbed by the plants in the chamber and determine the amount of carbon partitioned to above-ground biomass as well as in roots, and how much carbon will be put into the soil.

This story was first published by the African Centre for Crop Improvement (ACCI)
Words and photo: Shelagh McLoughlin