Imagine a crop that is exceptionally nutritious and can produce good yields in poor conditions with minimal labour.

That crop is sweetpotato, prized as a crucial food security buffer that is packed with edible energy and provides substantial quantities of vitamins A, B and C. It does, however, have one weakness — low protein content — which recent ACCI graduate Dr Sonia Naidoo chose to focus on for her PhD research.

Naidoo, a Mozambican, has farming in her blood and her career choice was shaped by time spent working in the garden of her grandmother, a smallholder farmer.

“I developed the love for plants through helping her in her small plot that used to feed the entire family,” she says. 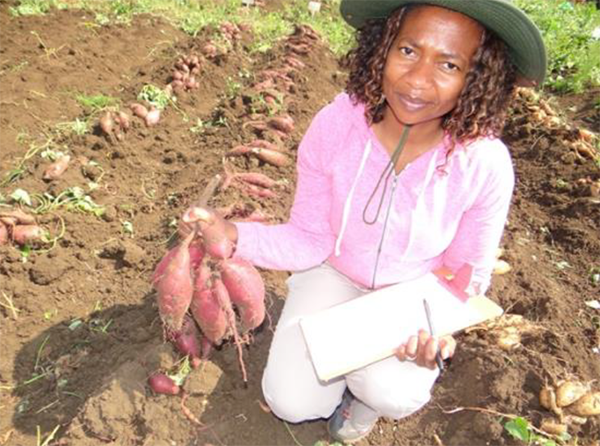 “When I saw my grandmother’s hard work, to the low yield that her crops would produce due to various reasons (drought, pests and disease) I often though that I wanted to study something that would contribute towards increasing her yield. I knew that the challenges that she used to face were not her struggle alone, that her neighbours and fellow farmers were facing the same.”

Naidoo chose to study agriculture, completing her Honours degree in Agronomy at University Eduardo Mondlane, in 2002 in Mozambique and then studying at the University of Pretoria for her MSc. in Agronomy in 2014.

She worked with sweetpotato during her master’s degree and “fell in love with the crop”.

“During my MSc, while analysing my data and writing up, I came to meet with Prof (Hussein) Shimelis and Prof (Mark) Laing at UKZN. They suggested that it would be interesting to breed for protein in sweetpotato, since many studies were already being done on other quality traits such as ß-carotene, a percusror of vitamin A,” she says.

“Sweetpotato is a superfood. It can make a difference in the livelihoods of underprivileged communities as a source of nutrients, caloric energy and fibre. I was immediately drawn to the project due to the potential that the crop has to alleviate poverty and malnutrition, yet continues to be underfunded and not much information is available, especially on its nutritional value.”

Naidoo started her PhD studies in 2015 with a thesis titled, “Enhancing the nutritional quality of sweetpotato [Ipomoea batatas (L.) Lam] through breeding”. She was supervised by Dr Sunette Laurie, a senior plant breeder and sweetpotato expert from the Agricultural Research Council-Vegetable and Ornamental Plants (ARC-VOP) , Shimelis and Laing.

“One of the objectives of my studies was to examine the genetic diversity of protein content in sweetpotato root among the South African germplasm collection, which comprises breeding material from around the world. This was the novel part of my studies. The team involved was able to develop a Near infra-red spectroscopy (NIRS) model for the quantifying of sweetpotato protein, and the diversity and range of protein in the South African collection was unveiled,” she says.

“First we characterised a genetically diverse set of sweetpotato from the germplasm collections maintained at the ARC, using sweetpotato morpho-agronomical traits,” says Naidoo.

“Once we identified and selected a genetically diverse set of sweetpotato genotypes based on the protein content, these selected clones were subjected to simple sequence repeat (SSR) marker diversity analysis,” says Naidoo.

Five parental clones were identified from two distinct heterotic groups, which were used for hybridization to exploit a heterosis-based and accelerated breeding scheme in the development of genotypes that combine high protein content with other important agronomic traits.

“Finally, after creating an F1 Family we determined the combining ability (ability to produce superior offspring) and heritability of selected quality nutrients and yield and yield-related traits.”

Naidoo’s project was not without its challenges. In January 2018, there was a major storm that almost destroyed her experiment on a quarter of a hectare at the ARC-VOP station in Roodeplaat, north of Pretoria.

In addition, she says as a woman, being able to balance studies and family was not easy. “I would like to encourage all the women out there engaged in science and research to press forward despite the many challenges that we are faced with. Take the opportunities when they are presented to you, develop and advance in your careers as scientists and researchers.

“I have been lucky to have enough funds to carry through such studies which involve large populations and several trial sites,” she says.

“I am thankful that the sponsors of this study (the ARC and the National Research Foundation (NRF)) made this possible.”

Naidoo is currently completing her term as a professional development student at the ARC and trying to publish journal articles from the findings in her thesis. She’s also looking for permanent employment or a post-doc fellowship position.