PhD project tests the effect of silicon on wheat quality

The study, which is being carried out by PhD student Marylyn Christian, is part of a larger ACCI project to breed climate-smart wheat with multiple desirable traits. This long-term project has so far involved five other students, starting with Dr Learnmore Mwadzingeni in 2014. He conducted a genetic analysis of 100 wheat genotypes for grain yield and yield-influencing traits. These genotypes were obtained mainly from CIMMYT’s drought and heat tolerance nurseries.

Dr Izack Mathew laid the groundwork for breeding for carbon sequestration by evaluating these genotypes and identifying the ten best. These are currently being used by Kwame Shamuyarira, who has crossed them to produce 90 progeny that he is developing further. Boluwatife OlaOlorun is using mutation breeding to harness the traits of drought tolerance and carbon sequestration in wheat and Zamalotshwa Thungo is breeding wheat for quality and drought-tolerance.

Christian, a native of Pietermaritzburg where the ACCI is based, did her masters in plant pathology. She volunteered with greenhouse and field staff to improve her technical skills, which led to her being hired to help Mwadzingeni with his crosses. 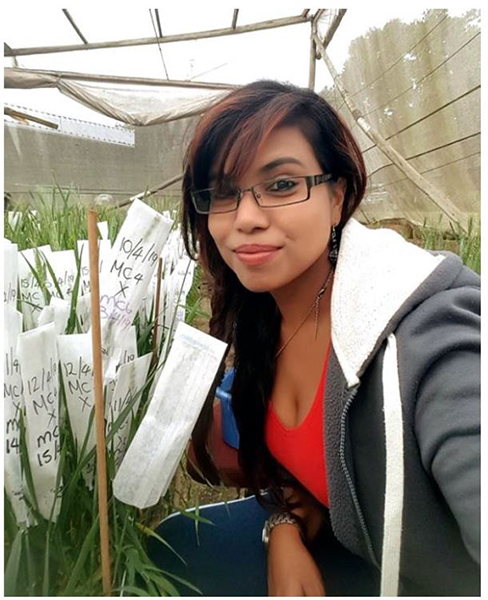 She was then offered the chance to do a PhD in plant breeding and is being supervised by Prof Hussein Shimelis, Prof Mark Laing and Prof Toi J. Tsilo. Her PhD is being funded by the Rockefeller Foundation and the National Research Foundation.

Christian chose to focus on breeding for silicon-use efficiency to improve the quality of drought-tolerant wheat. “Based on readings from my masters I know that silicon is good at reducing the effect of drought in crops and improving nutrition at the same time,” she says. “In recent years a number of publications have come out to show that there are silicon genes which occur in many crops including wheat. Originally they were found in rice.”

These “low silicon genes” enable the silicon to be taken up by the plant, help with the regulation of water and facilitate improved nutrient uptake.

“Silicon is an inert element that helps the plant structurally,” says Christian. “It also helps with photosynthesis and with mitigating the effect of drought in a number of ways.” These include reducing transpiration and increasing root elongation, particularly in drought, so that plants can go deeper to find soil moisture.

From a nutritional point of view, silicon improves the uptake of phosphorus, potassium and other nutrients and it also helps to reduce metal toxicity and enhances tolerance against a number of biotic and abiotic stresses.

Christian says while the effect of silicon fertilisers on drought and crop nutrition has been studied by crop scientists it is a relatively new area of research in plant breeding.

“My project is bringing these two aspects together. I started where Learnmore left off. He screened a number of drought-tolerant genotypes from CIMMYT, I chose the top 20 of these and used two different silicon formulations – liquid and granular,” she says.

Twenty genotypes were exposed to drought conditions, with and without silicon, and eight varieties were found that were able to pick up silicon as well as improve yield and other agronomic qualities. So far, Christian has completed two greenhouse screening trials and one field screening trial. “I was just about to complete my data collection before Covid hit,” she says.

Her next step is to plant out her crosses and see if there are maternal or paternal effects on silicon uptake and yield response and if there is additive or dominance genetic effects. She’ll also use NIR (near infrared spectroscopy) to measure the protein content of the grains in each genotype.

Christian says one of the main benefits for farmers of using silicon is that it can reduce their costs by enabling more effective uptake of applied fertiliser and potentially reducing the need for additional application.

“The premise is that because silicon is a micronutrient it’s not required in large amounts,” she says.

“The industry norm is to apply a second amount of nitrogen fertiliser to wheat at flowering to improve yield. What we are trying to show is that if you apply silicon with normal agricultural fertilisers at planting, you reduce the amount or need for a second nitrogen application.”

This reduces costs because nitrogen fertilizer production is an energy-intensive process and its cost is thus connected. In addition, silicon has an ongoing beneficial effect in the soil.

“Silicon fertiliser application has been shown to stay within the soil profile, compared to other nutrients, and plant silicon is also found in plant residues, although it may not be available as readily as the Si fertiliser,“ she says.

Christian says one of her aims, trying to identify that silicon has an effect on quality, hasn’t been tested as a breeding focus before.

“I’m trying to see if it works on wheat and by how much. So far silicon has been shown to improve yield and other agronomic traits,” she says. This is important because “traditionally when you get drought-tolerant wheat you lose out on the quality. It’s about survival of the fittest — which is not always the best quality.”

She’s hopeful that her research will bring the traits of drought tolerance and quality together in one genotype.