Boosting drought tolerance in wheat by developing the root system

Going somewhat against the grain, ACCI graduate Dr Isack Mathew has spent the last three years of his life focusing on how to develop a bigger root system in wheat.

“Traditionally, plant breeders breed mostly to increase yield,” he explains at the outset of the interview. “They pay less attention to other aspects.”

Mathew, a Zimbabwean, has been working on breeding wheat for drought-tolerance and carbon sequestration, traits that are mitigators of climate change effects. He was supervised by the ACCI’s deputy-director, Professor Hussein Shimelis, and Dr Vincent Chaplot from the Institute of Research and Development in Paris, France.

In plant breeding, the preoccupation with increasing yield has meant that the size of root mass has decreased in many varieties. “Old varieties used by farmers had larger roots that made them relatively more drought tolerant. Newer varieties’ biomass was shifted towards more grain,” says Mathew.

His research focused on the root system and how to increase water absorption capability. “I thought if I can improve the root system, this will increase drought tolerance, since the exploration capacity of the plant will increase and it will cover more soil volume for extracting water. 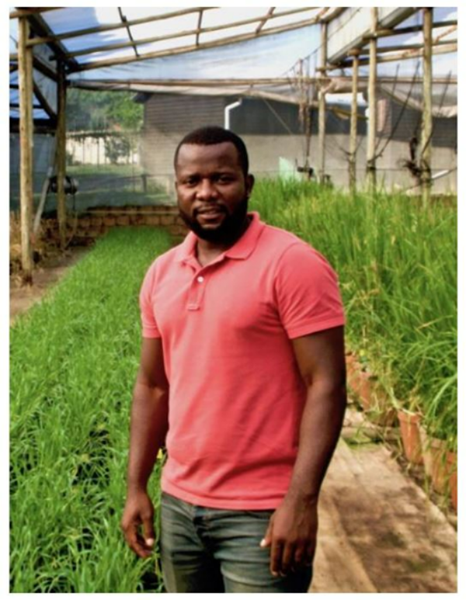 Another important focus of his research was looking at how to ultimately store more carbon in the soil. Carbon sequestration – where carbon is removed from the atmosphere and stored, usually by plants and trees during photosynthesis and in soil, is important because it helps mitigate the effects of global warming.

Because the three years he had available for his project were not enough to develop a cultivar, the project laid the groundwork for breeding with Mathew spending his time evaluating available genetic diversity for the end goal.

“The success of plant breeding hinges on the diversity you have at your disposal,” he explains. “We got 100 wheat genotypes (varieties) from CIMMYT and the Institute of Research and

Development.” The varieties from CIMMYT had been prebred for drought and heat tolerance.

“We knew that drought and heat tolerance characteristics usually coincide with good characteristics for the root system. Our hypothesis was that they would produce good roots because they had been bred for drought tolerance, and we knew that carbon sequestration would depend on rooting capacity.”

Two different groups were planted—in a greenhouse where they grew under optimal conditions, and in the field where they were exposed to drought. Mathew looked at agronomic traits, focusing on biomass production: how much did each variety produce and how much was above ground, compared to in the root system. This allowed him to calculate the root-to-shoot ratio, which is a good indicator of carbon sequestration and drought tolerance.

Shifting this biomass allocation toward the roots also favours more carbon sequestration. During the plant’s growth it produces exudates that are carbon rich, and over time these are incorporated into the soil by microbes.

When the crop is harvested its roots containing carbon are left in the soil.

In addition, these decaying roots improve soil health and water-holding capacity, which Mathew says is an indirect benefit for farmers, although they might not identify it as a priority when choosing a variety.

“Farmers have practices that they don’t change easily, but they will adopt improved varieties readily. For them, the main benefit is the drought tolerance, because they would obtain reasonable yields even in dry conditions.”

While adoption rates of other new technologies for soil improvement are low, planting a variety with a larger root system means that in the long term farmers need to use less fertilizer and irrigate less because of improved soil health and water retention.

After evaluating 100 genotypes, Mathew identified the best 10. These were crossed to generate families that will be used as a starting population for selection. He also did genomic work on the 100 varieties, unpacking the DNA makeup of each variety and locating the loci of key quantitative traits.

“We did a genome-wide association study to identify genes responsible for characteristics important for biomass allocation and yield. This information can be used in future research,” he says.

Mathew’s work was funded by the Water Research Commission, who are also funding similar research on crops like sorghum and maize. He also received a bursary from the National Research Foundation.

This story was first published by the African Centre for Crop Improvement (ACCI)
Words and photo: Shelagh McLoughlin